Quick Draw Artist Interviews area series of interviews conducted by Otino Corsano using IM Chat applications.Spontaneous conversations with international artists are recorded anddocumented specifically for publication on this blog.
Quick: empathy. Truth is - one can never fully understand what another has survived. What they have left behind.dust. Tried calling yet you were “counselling”. If it is true one's entire lifeis relevant than why are we disconnecting? And if they knew theywould be calling too. dialling. Draw: artabout art. Elliott 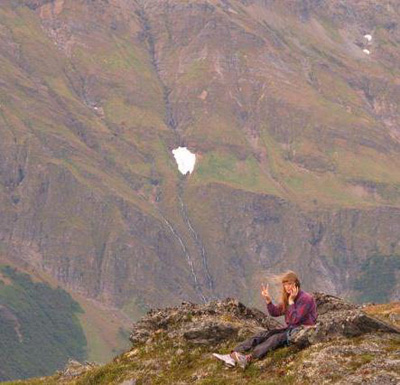 Sarah Elliott is a graduate of the Schoolof the Art Institute of Chicago and temporarily living in Alaska. She hasrecently shown at Back Yard Projects in New York City where she normallyresides and works.
http://sarahelliott.info 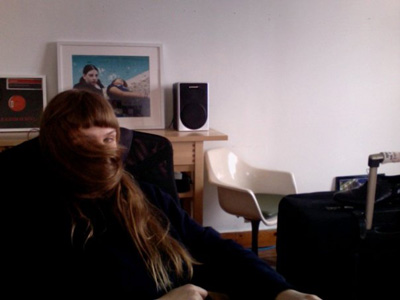 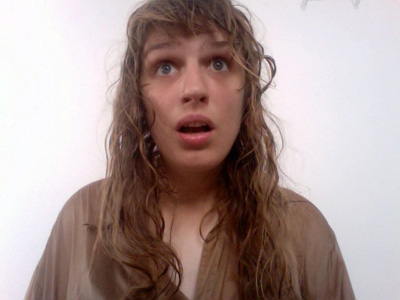 Sarah
5:45pm
why are you asking me to do aninterview btw?
Otino
5:46pm
I noticed you studied at SAIC
and SAIC usually signifiesinteresting work.
I guess we will soon see...
Sarah
5:46pm
haha.
okay.
i am interested in being interested. 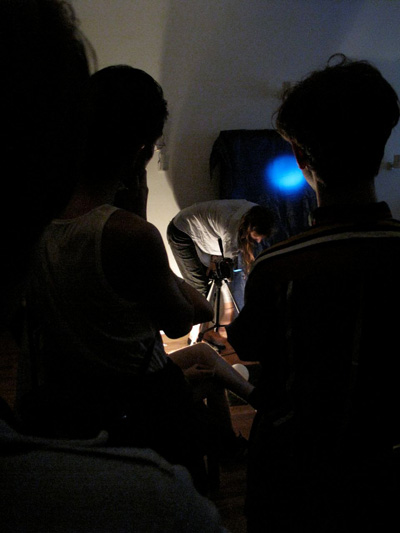 Otino
5:46pm
Your website seems like a puzzle.
The "Documentation" linktakes me to
http://en.wikipedia.org/wiki/Menagerie
Is your work really related tokeeping exotic pets
or is this link ametaphor for collecting art?
Sarah
5:49pm
i think collecting is more similar tokeeping exotic pets than it is to
Cubism.
Otino
5:50pm
Because contemporary artworks alwaysneed such care?
Opposing theassumption art will remain forever archival?
Sarah
5:57pm
hahaha. 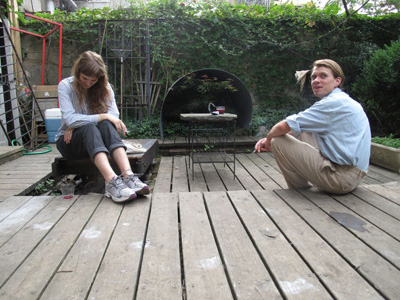 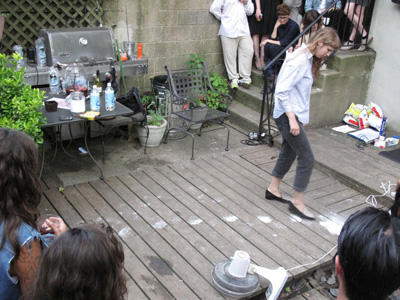 Sarah
7:48 PM
i am sort of a collector and arrangermore than anything;
an artist more than afabricator.
So I use this open premise as away to influence or contextualize my collecting.
The material is less important-
I am really interested increating a particular kind of space.
Otino
7:51 PM
This July 2011 space looks verysocial… 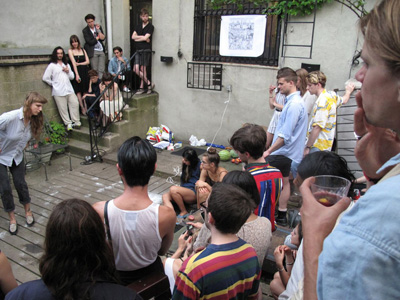 Sarah
7:51 PM
yes.
Otino
7:51 PM
…and inclusive.
Collaborative?
Sarah
7:52 PM
YES.
I am interested in doing thingsthat implicate the audience;
yet, I am also interested inconfusing the space by moving from quite theatrical sequence (even performingElizabeth Taylor a bit)
and facilitating a morepractical kind of audience/performer relationship.
For example: handing out bagsof chips, becoming a tour guide,
giving a history of thearchitecture of the local neighborhood block. 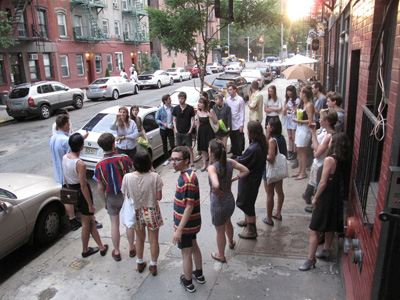 Otino
7:57 PM
Your work reminds me of thework of Kelly Lynn Jones 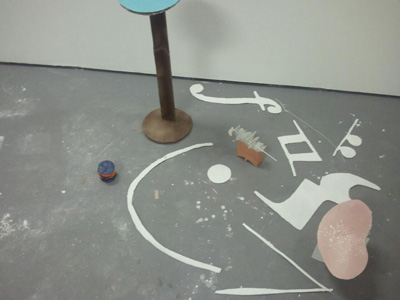 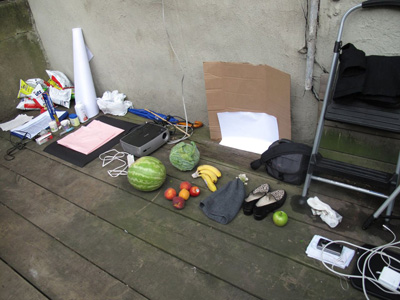 Otino
7:57 PM
Your conceptual approaches tocollaboration and installation seem similar.
Lets talk about more new work.
In "Conversations" sculpturesmade of cardboard are unique structures.
Are the titles random names ofpeople or are they the names of the artists who first constructed them? 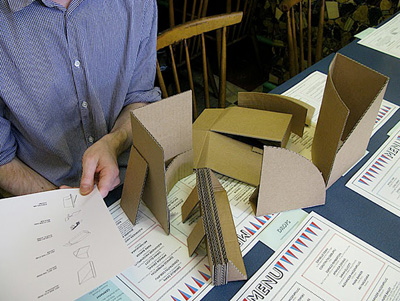 Sarah
8:09 PM
"Conversations" wasmade for an exhibition called “Menu” in London.
The curator, KatieGuggenheim, asked everyone to make table top works
from which you could"order" from a menu.
In making the sculptures Idedicated each title to a person
I was engaged in significantand ongoing dialogue with at the time.
I made these sculpturaldiagrams
and when someone ordered a workthey would get all the sculptures along with a list of the names of the peoplein the titles and their telephone numbers.
So there was an invitation tostart dialogues with these people - conversations abstracted or influenced bythe sculptures.
Most of the people on the list wereAmerican, but mostly the people in the UK
were called.

Otino
8:16 PM
neat idea.
Sculpture becoming dialogue.
Such extremes between the concreteand ephemeral.
Sarah
8:16 PM
right
i am interested in this kind offaulty translation often as a way to open up dialogic spaces but withoutrepopulating them too fast.
Otino
8:19 PM
Related: "ProvosationalScripts" appear to be narratives created from random objects placed inproximity to create new meanings.
I’m guessing the diagrams forthe installations were created after the real sculptures were displayed? 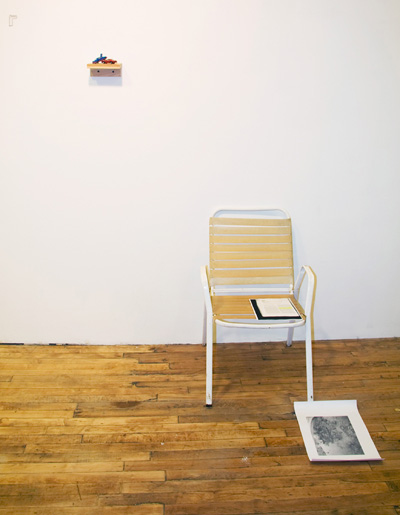 Sarah
8:20 PM
yes.
I made those diagrams afterwardsas a way to document the work because the specificities of the material arereally important and not so legible in the actual sculptures. 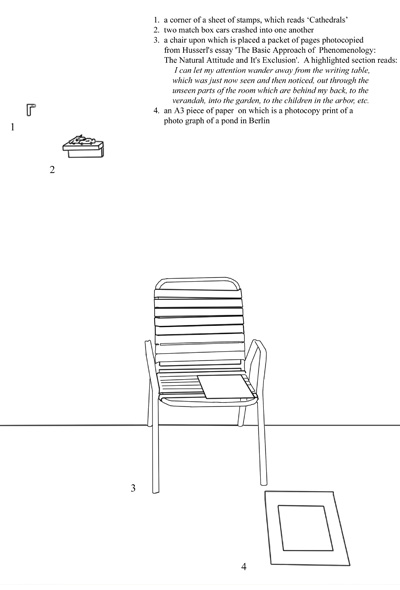 Otino
8:21 PM
Were the "ProvosationalScripts" attempts to make sculpture cinematic? 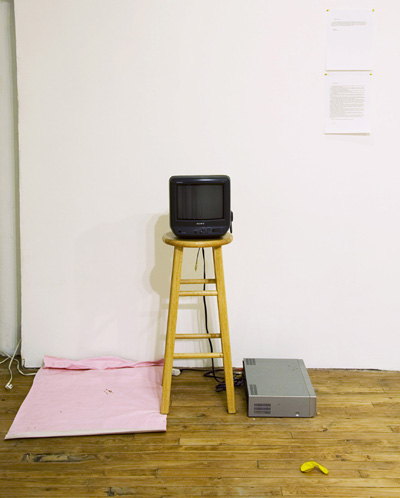 Sarah
8:22 PM
oh that's nice - I've neverthought about it like that.
I was thinking about historiography- the narration of history.
In a description of this work Iwrote: "in narratives of facts, like history, discrepancy becomes a crisis."
I was also thinking about"parataxis" as opposed to "syntaxis"
letting things remain besideeach other without having to be synthesized
into a common logic. 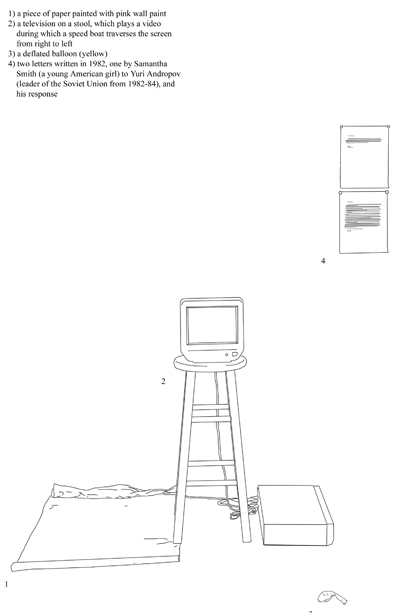 Otino
8:25 PM
So proximity does notinevitably infer meaning?
Sarah
8:26 PM
no - see, proximity IS meaningitself.
"There is not beingwithout being with." - Jean Luc Nancy
A representation of a car crashwith matchbox cars placed next to a photocopied Husserl text already hasmeaning.
Even if there is no context inwhich it has already been explicated.
Otino
8:29 PM
The work "Shapes"seems to be a good synthesis of elements into a greater concept if not a singularcomposition. 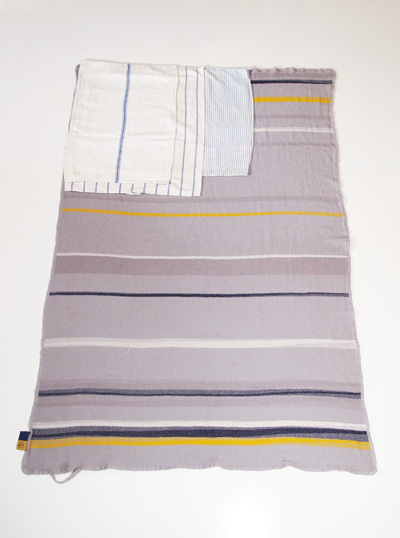 Sarah
8:30 PM
yeah
but then there is the diagram. 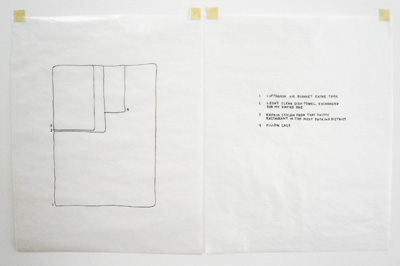 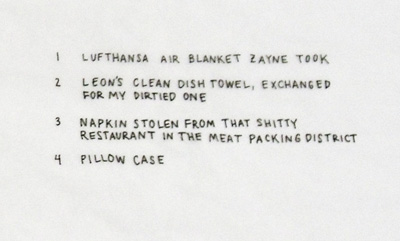 Sarah
8:31 PM
haha.
Otino
8:31 PM
Yes – just like the viewer's"haha".
Sarah
8:31 PM
sometimes i show the piecewithout the diagrams.
i can never decide.
really the work has a lot to dowith seeing minimalist painting everywhere in things.
Otino
8:32 PM
Even in the towels your friendssteal.
Sarah
8:32 PM
yes.
Otino
8:32 PM
"Pools" are myfavorite Sarah. 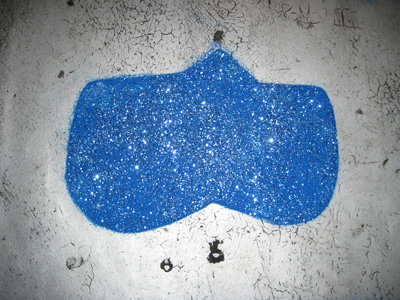 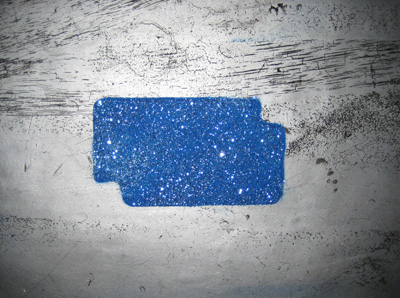 Sarah
8:34 PM
yep
i also made a diagram set in adifferent piece.
While I was making these poolsthis aria from a Puccini opera would begin and then I would keep resetting theneedle between each pool so only the first ten seconds ever played. Maybethe opera mucks it up for you though? 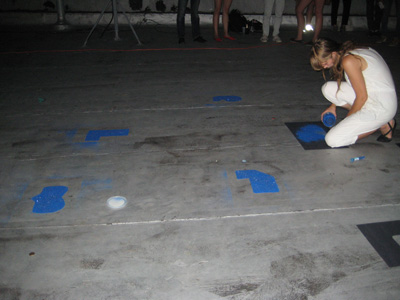 Otino
8:35 PM
Whatever - I saw them asflatter Hockney's.
Sarah
8:35 PM
sure
as my really silly ex studiomate said "swimming pools are a good subject for art" 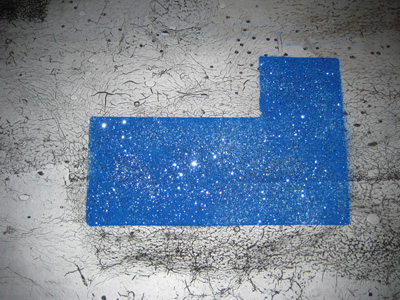 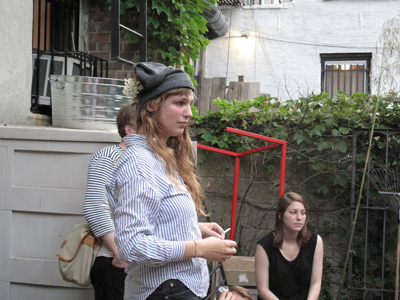 Sarah
8:38 PM
“The problem with telling achild I understand how you feel…”
Otino
8:39 PM
Can I fully quote you and simplyrestate what you sent me in an earlier email?
Sarah
8:39 PM
yes,
you can.
Otino
8:39 PM
You stated:
All of these works haveindividual titles yet they are part of a larger piece called
"The problem with tellinga child I understand how you feel is that some children just simply won’tbelieve you, they'll say 'No, you don't'. But if you take the time to bother tobe specific (the first day of school can be scary, so many new things to getused to) then the child will know that you really do understand."
Sarah
8:40 PM
right
Otino
8:40 PM
Are all of these works reallyabout taking the time to communicate more fully and with more sensitivity?
Sarah
8:40 PM
yeah, basically.
Otino
8:41 PM
"Tops" seems like itis made up of the tops of cut and discarded fruits and vegetables? 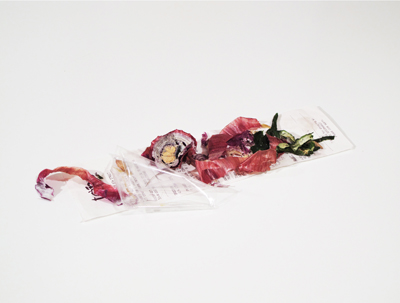 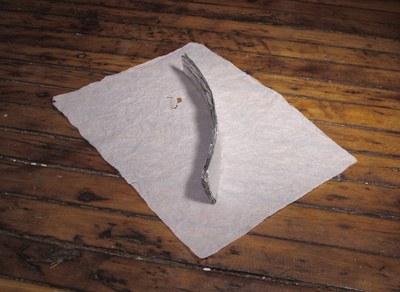 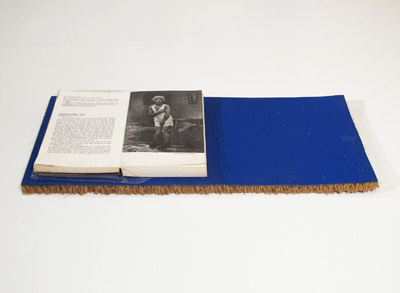 Sarah
8:55 PM
Yes, the text on the book thatis on the mat in this work is about the Marx Brothers film “Horsefeathers”.
There is a really great text init titled: “Horsefeathers brings up the problem of approach". It's areally comical essay
Otino
8:57 PM
Does it relate to the idea agroup of underdogs can win despite the odds - like the movie's plot?
Sarah
8:59 PM
well basically i aminterested in the idea of "the problem of approach" part of the title.
In this piece i am thinking alot about how to approach things with entirely specific terms – as mentioned - "takingthe time to bother being specific".
i am interested in specificity.
Otino
9:01 PM
Like how specific (subjective) meaningsare the only real meanings and how universality is a construction?
Sarah
9:02 PM
no. no. i am not into apolemical truth situation.
Really this piece works almost asa kind of object arranging meditation.
Otino
9:06 PM
"Dark Reds" is aphoto of a box of oranges you had in your possession at one point 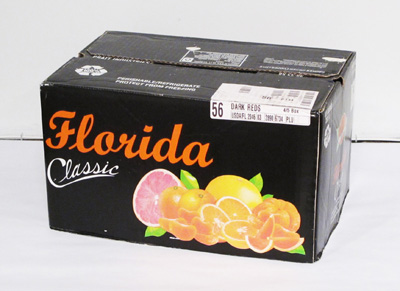 Sarah
9:06 PM
yes.
there is a sticker on theorange box which reads "Dark Reds"
which i found quite compelling.
Otino
9:08 PM
It is a type of grapefruit  - right?
Sarah
9:09 PM
yes
Otino
9:09 PM
And the symbolism orsignificance here?
Sarah
9:10 PM
Again, I found this phrase"Dark Reds" really evocative
i am really interested in weirdbits of language like this - if you slightly divorce them from their context theycan become really poetic.
"Dark Reds" somehowbecomes really strange and poetic to me.
Otino
9:13 PM
What is the work"Monument" is made of? 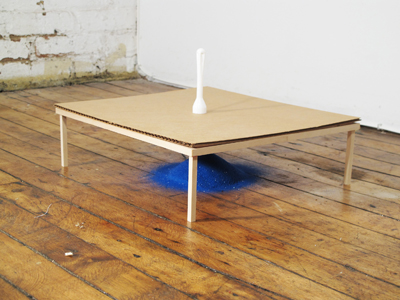 Sarah
9:14 PM
“Monument” is made of balsawood (I constructed the platform),
cardboard, colored sand andsome weird plastic applicator tip.
I think it is also partially ajoke about modernist sculpture -
it's friends with the ‘Serra’piece.
Otino
9:15 PM
So it is tiny!
Sarah
9:15 PM
yeah. applicator tip is aboutfour inches.
Otino
9:15 PM
A weird and freaky dimensionalshift just occurred for me
when you said "applicatortip".
It looks like some crazy YvesKlien magic trick with the applicator stick given birth to the Anish Kapoor, blue, magic dust below.
Otino
9:18 PM
It seems as though you really are taking care to examine aesthetics and meaning moreclosely in these works to build subtle yet poignant effects in the viewer.
Are you trying to convince theart viewer you actually do care for them?
Sarah
9:19 PM
yes, i think yourcharacterization is really apt.
i would like to. 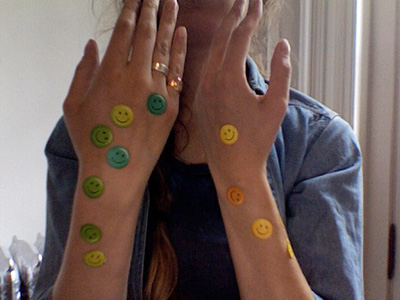