Quick Draw Artist Interviews are a series of interviews conducted by Otino Corsano using Facebook's IM Chat feature. Spontaneous conversations with international artists are recorded and documented specifically for publication on this blog.

Quick: prism. You’ll be my mirror. It’s nice to have your pick when an avenue advances in seven directions. Thinking of a better band name. This is why you spend so much time in your studio. Following your leads. Covering your tracks. Reissuing before restoring is required. Demolishing your citations. Draw: art about art. 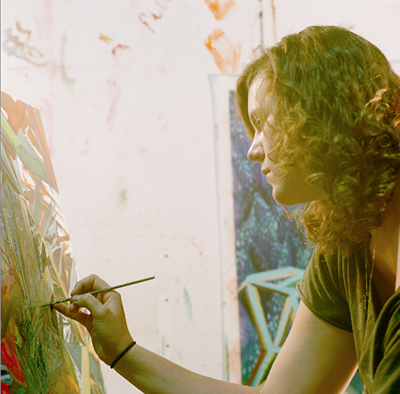 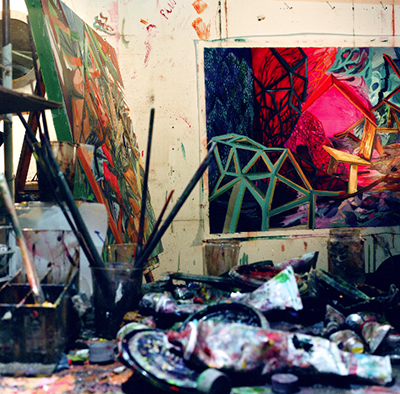 Otino
9:48pm
Are you still in your studio painting?

Rachel
9:49pm
I am. Actually I just stepped on a tube of paint. 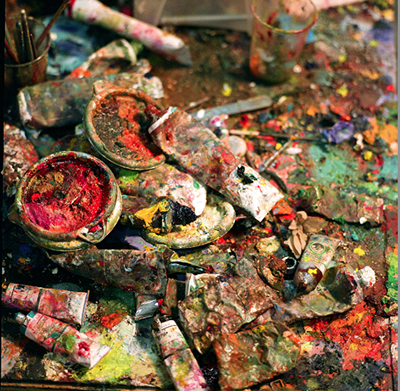 Otino
9:49pm
I hear that is very good luck.
Congratulations…

Rachel
9:50pm
Thanks. It’s like the opposite of breaking a mirror.

Otino
9:50pm
…on your upcoming solo show
~ not on squishing the life out of a paint tube.
ha. 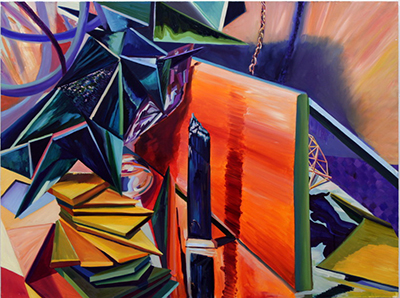 Otino
9:51pm
Are you still working on paintings for your upcoming solo show at Nicholas Metivier Gallery or have those works already been selected?

Rachel
9:53pm
No, I'm still working; I never really stop working.
We have enough for the show right now; but I'm not satisfied yet.
I'm currently working on seven paintings simultaneously.
They're all at different stages of completion; yet, the common goal is to get them all done. 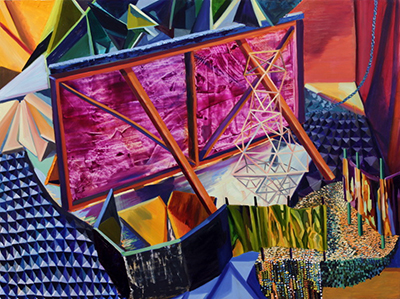 Seriously though... It seems like you have been painting the way you do for quite some time.

Rachel
9:57pm
Yeah - it's a life long project.
Actually, I'm pumping paint out of a syringe for the painting I'm working on right now. 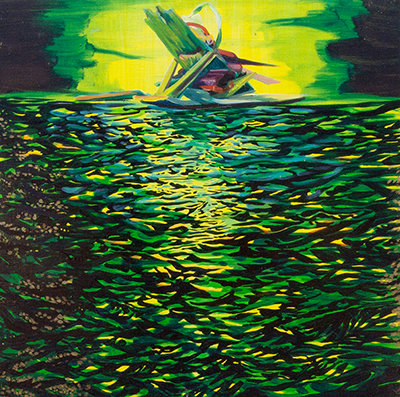 Otino
9:58pm
That technique seems less unique.
So then you do in fact experiment with your approach quite a bit?
Although it does seem the formal aspects of the work are very consistent across the board.
Does this aesthetic consistency ensure an identifiable signature?

Rachel
10:01pm
I'm not sure any technique in painting is unique any more.
At this point, most technical avenues have already been ventured by one artist or another.
My interest lies less in a unique quality in technique and more in how different techniques start to collide in a painting. 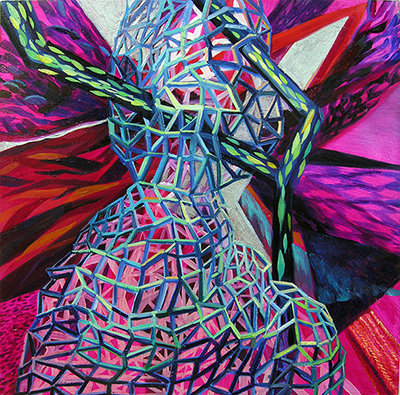 Otino
10:03pm
It seems any particular painting application is secondary to your overarching approach in creating 3D models or still lifes in your studio from common objects later transcribed onto the canvas via abstraction - true?

Rachel
10:03pm
I'm not sure I’m invested in creating an identifiable signature.
If a consistent technical approach exists it lies more in deriving forms from the maquettes I build.
My first approach into painting is the observation of these models and I think a second nature approach to translation might be what gives the work a unavoidable consistency. 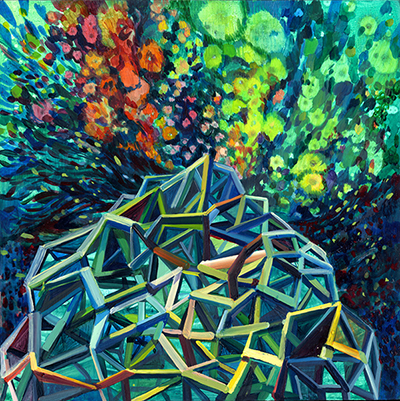 Otino
10:04pm
I beat you to the model discussion - just sayin’.
We were typing in unison.

Rachel
10:06pm
So yeah, I think the prefabricated models are used more than to create a consistent aesthetic; rather they are definitely the most helpful part of my process. 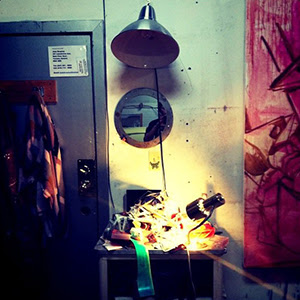 Otino
10:07pm
You realize this transference between media is more common than applying paint with a syringe right?

Otino
10:10pm
So how is this approach of yours different from Morandi painting from the bottles in his studio? 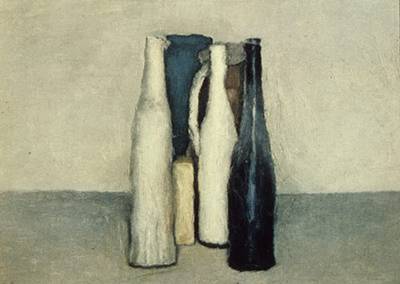 Rachel
10:15pm
Authorship is a funny thing. I'm not sure it’s important to claim ownership to the process of working from models and I don't think I could. To me, that's equivalent to claiming you have some sort of ownership to working from photographs. 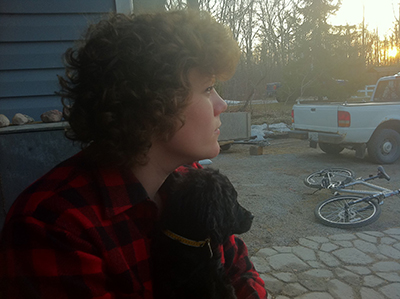 Otino
10:17pm
Sure; yet, if I painted from photographs I would have my own reasons for doing so.

If you want some insight into how I approach making the models I suppose I'm just making interesting spaces while choosing materials allowing the most play in between the transformation and mimicry occurring when they're painted. I look at the materials as a way of making some sort of narrative in the paintings, and how together they can create a space the viewer can explore. 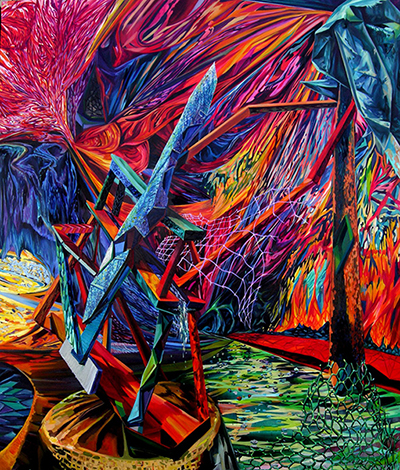 Otino
10:18pm
I’m more interested in your reasons for painting from models of common, everyday or found materials beyond the formal or preliminary resource phase.

Rachel
10:27pm
Sure, of course.
When I first started work on a concentrated body of paintings, I became interested in elements I'm still exploring in painting today.
Primarily, I wanted to create physical images of mimetic spaces referencing architecture, video games and filmic spaces. 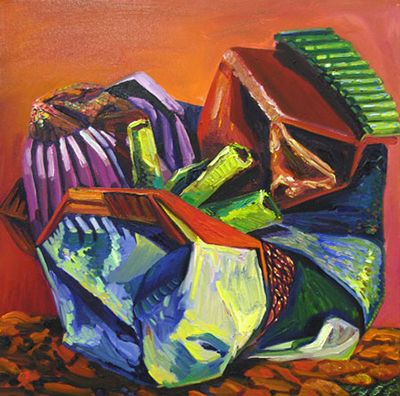 Initially, I was working at conglomerating found images together in colleges as reference for the paintings. This process failed. It didn't reflect what I was trying to achieve. I wanted to critique illusion through painting since historically the medium has been used to mimic illusion yet actually exists as an object.
Working from collaged photographs didn't work because I was already working from a translation once removed. 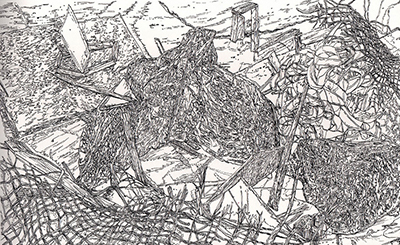 So a personal eureka moment occurred in a class by Ed Pien when I started to work from scraps of paper. I quickly fabricated the paper into mini sculptures and it occurred to me I should be making my own original spaces.

Otino
10:30pm
In the end, how important are the models to the final works?
Do they even need to be mentioned?
I don't imagine you ever considering exhibiting them alongside the paintings as recycled sculpture right? 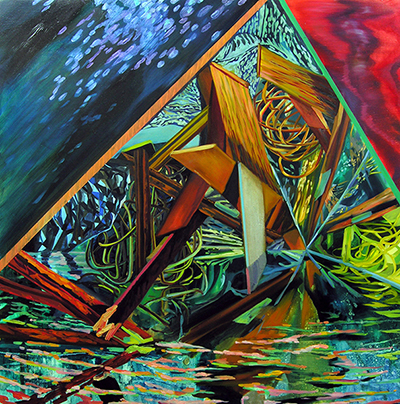 Rachel
10:34pm
No, I don't.
You would end up getting people looking at the models and then looking at the paintings and trying to make comparisons or finding faults or recognizing bits and pieces and this would ruin a personal experience with the paintings.
I guess my project is also to reveal all simulated images, even the most imaginary and absurd, to build upon known and common experiences.

Otino
10:38pm
Speaking of common experiences:
When I first viewed the paintings - without any information regarding your process at all - I immediately thought of the work of Ehryn Torrell, 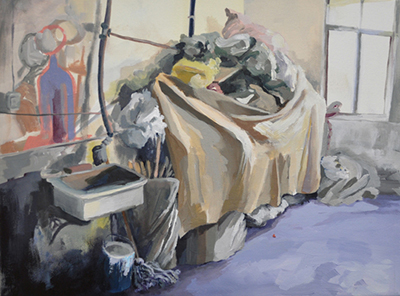 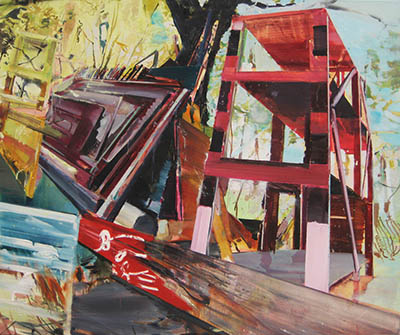 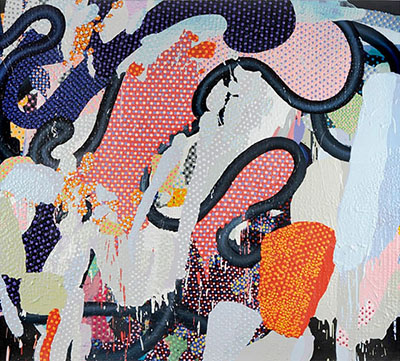 I generally avoid these from the hip formal comparisons; yet, with your painting approach formalism does ring with an amalgamated, high chroma abstract style.

Rachel
10:42pm
Sure, I definitely feel an affinity for the way both Golland and Kissick use colour. I'm not familiar with Torrell's work so I'm unable to speak to her work.

Otino
10:43pm
Why do you sometimes paint on Mylar as a substrate?
Does this change the work? 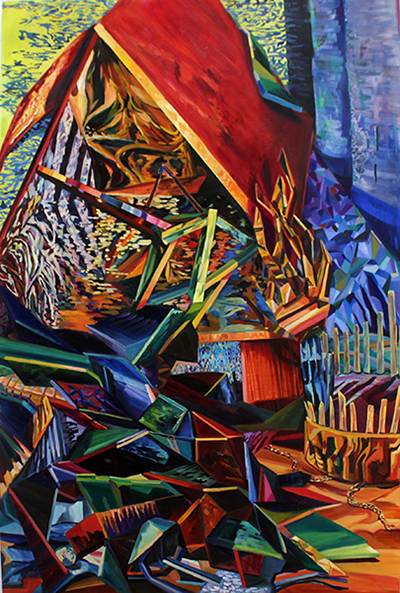 Rachel
10:49pm
First, it’s the perfect substrate for working on if I'm travelling. I originally started to work on it when I was participating in the Triangle Artist Workshop in NYC in 2010. I was broke and I couldn't afford to ship any paintings back so I decided to try Mylar since it was affordable and I could roll it up to take on the bus back to Toronto. I heard it was fantastic, and it was. I immediately fell in love with the surface. It does something to the colour, I think because it's unnecessary to prime with gesso. The paint has nowhere to go - it just sits on the surface and the colour is at its full intensity. There’s no sinking into an absorbent ground. 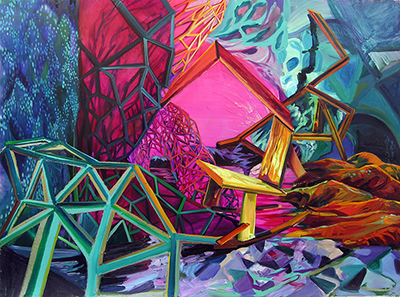 I also like its synthetic nature. I feel there's a dialogue between the content of the work and the newness of this material.

The rest of the new work is either on Mylar or wood panel. I've even prepared the panel in a way allowing the paint sit on the surface in a similar way to Mylar. It's not identical; the wood panel allows for extended and different applications of interest to me. 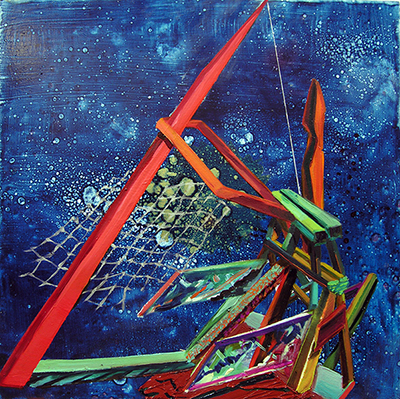 Otino
10:51pm
Please view this next comment only as a compliment; yet I imagine paint companies should pay you simply for perfectly showcasing their spectrums.
Why the intense saturation of colour? 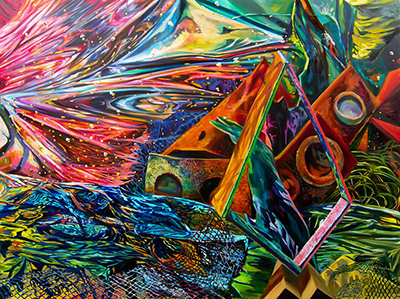 Rachel
11:00pm
To be honest, my decisions about colour end up being fairly hedonistic.
The models are basically devoid of colour. I choose a lot of materials without a specific colour palette in order to leave it until the painting process. Making colour decisions is the part of I enjoy most about painting. I feel I can lead a viewer into the picture plane, into crevices and to allow works to have specific moods. I like to personify the objects in the paintings and I feel playful colour choices help me to do that.

As far as the works being intensely saturated -
I guess it all started with wanting some optical disturbances to occur at different planes in the picture. So for example, a perspective plane which should recede next to another plane because of the way its oriented in the drawn space of the image suddenly advances by the force of its colour. This type of colour obstruction fascinates me. Other decisions are really instinctual when I allow myself to be. 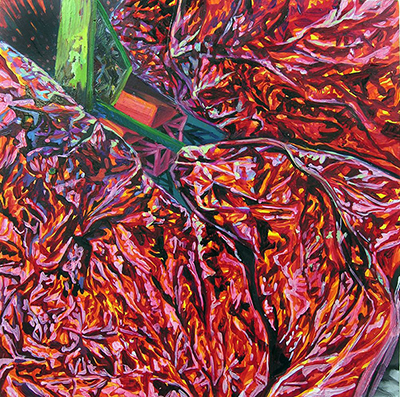 I also don't want to be too literal with the materials I'm working from so colour is a way of enhancing an arcane feeling in the paintings. 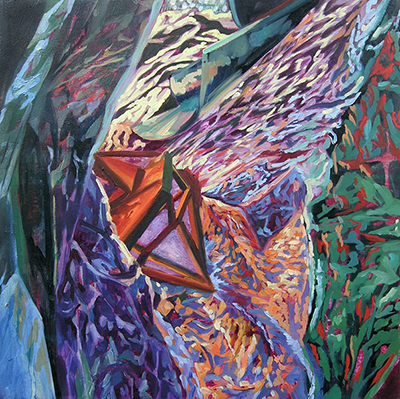 Otino
11:03pm
I don't think I've directly asked you what your paintings are about. I wonder if walking through a specific work would be beneficial or you would rather speak generally to your "life long project"?

Rachel
11:06pm
I could speak about a specific work if you like...

Rachel
11:07pm
Oh dear that will be a difficult choice. 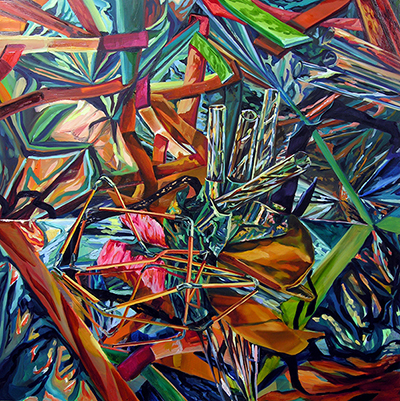 Rachel
11:14pm
I found this triangular, mirrored prism broken in a scrap bin at an OCADU studio. This object has been a gem to me. The mirror is a little broken, it has this great, slightly greenish hue and it’s the perfect size. I've made a few paintings using it as a prop, or as a setting. This painting was the first.

I've been interested in employing mirrors in my work since I saw Velázquez's work in person. Basically, the prism creates a kaleidoscopic space. I was curious to see how I could make a structure inside this space while painting both the object and its reflection all to the same degree, with the same hand. The illusions sort of come in on themselves. I guess it was sort of a game for me.
That's also why it’s called “No Clear Ending”. 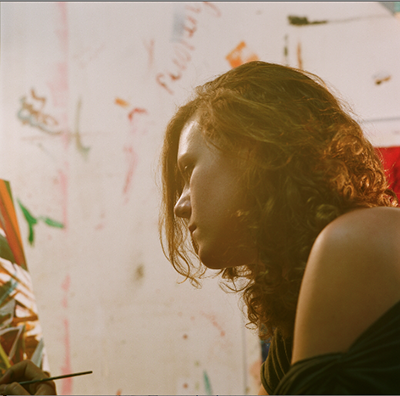 Rachel
11:16pm
Thanks! It's great to have an opportunity to talk about the work.

Otino
11:17pm
I'm looking forward to seeing the work in real life at your upcoming solo-show. 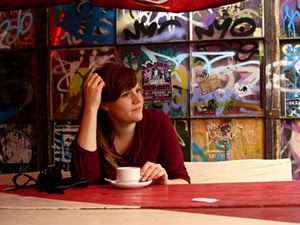